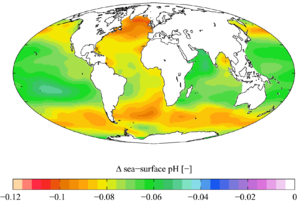 Fundamental changes in seawater chemistry are occurring throughout the world's oceans. Since the beginning of the industrial revolution, the release of carbon dioxide (CO2) from humankind's industrial and agricultural activities has increased the amount of CO2 in the atmosphere. The ocean absorbs almost a third of the CO2 we release into the atmosphere every year, so as atmospheric CO2 levels increase, so do the levels in the ocean. Initially, many scientists focused on the benefits of the ocean removing this greenhouse gas from the atmosphere. However, decades of ocean observations now show that there is also a downside — the CO2 absorbed by the ocean is changing the chemistry of the seawater, a process called ocean acidification. This change in the ocean’s chemistry will have profound effects on life in the ocean, and those who depend on it.

The animation shows oceans' acidification and its environmnetal impact here.